I’m currently reading Rising ‘44, a book by Norman Davies which covers the terrible events in the polish capital of Warsaw in the penultimate year of World War II. It’s a brilliant book by one of my favourite authors, on a subject he evidently cares deeply about - he’s a Pola-phile who studied at Krakow, and wrote the definitive english language history of Poland, God’s Playground.

For those that don’t know, the Warsaw rising was a calamitous battle instigated by the Polish underground home army against their Nazi occupiers. The capital had been occupied for 5 years, and as the Soviets pushed the German lines back from the east, the insurgents saw the chance to retake their city for themselves. They expected that within days the capital could be taken, with support from their Soviet and Western allies, and so begin the liberation of the whole of Poland back to its pre-war borders.

Instead, the battle lasted 63 days (longer than the siege of Stalingrad), with effectively no support from the Soviets, and meager airdrops from British bases in Italy. The resistance army was pitifully armed, but managed to hold its own against the far stronger Wehrmacht forces. More than 150,000-200,000 civilians perished, mostly from retaliatory mass executions performed by the Nazi’s, and the entire city was demolished. 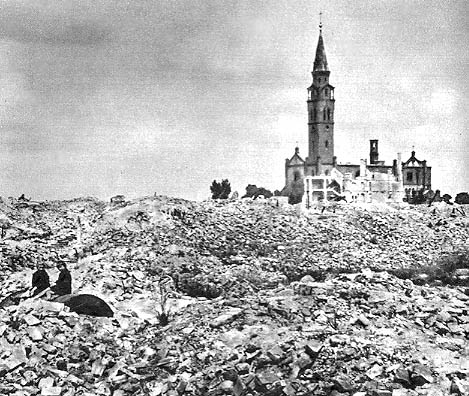 Complete destruction; only piles of rubble remain. Reminiscent of recent images from Syria.

Apportioning blame for this atrocity is difficult; you could say that the timing of the insurrection was poor, or that preparations were insufficient, or simply that the Varsovians were unlucky, victims of a series of calamitous decisions and events. But one cause, still controversial now, was being raised at all levels (even Churchill was suspicious) - Soviet stalling.

At the time of the rising, Eric Blair, also known by his alias George Orwell, was writing what would become Animal Farm, his allegorical fable on Soviet style totalitarianism. He was also literary editor of the socialist journal the Tribune, and wrote between 1943-1944 on all manner of political topics.

The article below was published on the 1st of September, 1944, 6 weeks in to the battle. It was aimed to counter the arguments of an article that appeared in the previous week criticising the rising, but also as a general criticism of the unwavering support for Moscow shown by the British press. As literary takedowns go, it is one of the best; a principled stand for reason against the disinformation and dishonesty of the British intelligentsia of the time, oblivious to the execution of one of the great injustices of the twentieth century. I thought it was brilliant.

I heartedly recommend reading the book, as I do anything by Norman Davies, but if you don’t have time for a 700 page door stop and still want to learn more about the Rising then this site has a great interactive overview.

Soviet advances on the eastern front, with suspiciously little progress past Warsaw during the rising.

The Recent Rising in Warsaw

It is not my primary job to discuss the details of contemporary politics, but this week there is something that cries out to be said. Since, it seems, nobody else will do so, I want to protest against the mean and cowardly attitude adopted by the British press towards the recent rising in Warsaw.

As soon as the news of the rising broke, the News Chronicle and kindred papers adopted a markedly disapproving attitude. One was left with the general impression that the Poles deserved to have their bottoms smacked for doing what all the Allied wirelesses had been urging them to do for years past, and that they would not be given and did not deserve to be given any help from outside. A few papers tentatively suggested that arms and supplies might be dropped by the Anglo-Americans, a thousand miles away: no one, so far as I know, suggested that this might be done by the Russians, perhaps twenty miles away. The New Statesman, in its issue of 18 August, even went so far as to doubt whether appreciable help could be given from the air in such circumstances. All or nearly all the papers of the Left were full of blame for the émigré London Government which had ‘prematurely’ ordered its followers to rise when the Red army was at the gates. This line of thought is adequately set forth in a letter to last week’s Tribune from Mr G. Barraclough. He makes the following speciﬁc charges:

No shadow of proof is offered for any of these charges, though 1 and 2 are of a kind that could be veriﬁed and may well be true. My own guess is that 2 is true and 1 partly true. The third charge makes nonsense of the ﬁrst two. If the London Government is not accepted by the mass of the people in Warsaw, why should they raise a desperate insurrection on its orders? By blaming Sosnkowski and the rest for the rising, you are automatically assuming that it is to them that the Polish people looks for guidance. This obvious contradiction has been repeated in paper after paper, without, so far as I know, a single person having the honesty to point it out. As for the use of such expressions as émigré, it is simply a rhetorical trick. If the London Poles are migr s, so are the Polish National Committee of Liberation, besides the ‘free’ Governments of all the occupied countries. Why does one become an émigré by emigrating to London and not by emigrating to Moscow?

Charge No. 4 is morally on a par with the Osservatore Romano’s suggestion that the Russians held up their attack on Warsaw in order to get as many Polish resisters as possible killed off. It is the unproved and unprovable assertion of a mere propagandist who has no wish to establish the truth, but is simply out to do as much dirt on his opponent as possible. And all that I have read about this matter in the press—except for some very obscure papers and some remarks in Tribune, the Economist and the Evening Standard—is on the same level as Mr Barraclough’s letter.

Now, I know nothing of Polish affairs, and even if I had the power to do so I would not intervene in the struggle between the London Polish Government and the Moscow National Committee of Liberation. What I am concerned with is the attitude of the British intelligentsia, who cannot raise between them one single voice to question what they believe to be Russian policy, no matter what turn it takes, and in this case have had the unheard-of meanness to hint that our bombers ought not to be sent to the aid of our comrades ﬁghting in Warsaw. The enormous majority of left-wingers who swallow the policy put out by the News Chronicle, etc., know no more about Poland than I do. All they know is that the Russians object to the London Government and have set up a rival organization, and so far as they are concerned that settles the matter. If tomorrow Stalin were to drop the Committee of Liberation and recognize the London Government, the whole British intelligentsia would ﬂock after him like a troop of parrots. Their attitude towards Russian foreign policy is not ‘Is this policy right or wrong?’ but ‘This is Russian policy: how can we make it appear right?’ And this attitude is defended, if at all, solely on grounds of power.

The Russians are powerful in eastern Europe, we are not: therefore we must not oppose them. This involves the principle, of its nature alien to Socialism, that you must not protest against an evil which you cannot prevent.

I cannot discuss here why it is that the British intelligentsia, with few exceptions, have developed a nationalistic loyalty towards the U.S.S.R. and are dishonestly uncritical of its policies. In any case, I have discussed it elsewhere. But I would like to close with two considerations which are worth thinking over.

First of all, a message to English left-wing journalists and intellectuals generally: ‘Do remember that dishonesty and cowardice always have to be paid for. Don’t imagine that for years on end you can make yourself the boot-licking propagandist of the Soviet régime, or any other régime, and then suddenly return to mental decency. Once a whore, always a whore.’

Secondly, a wider consideration. Nothing is more important in the world today than Anglo-Russian friendship and co-operation, and that will not be attained without plain speaking. The best way to come to an agreement with a foreign nation is not to refrain from criticizing its policies, even to the extent of leaving your own people in the dark about them. At present, so slavish is the attitude of nearly the whole British press that ordinary people have very little idea of what is happening, and may well be committed to policies which they will repudiate in ﬁve years’ time. In a shadowy sort of way we have been told that the Russian peace terms are a super-Versailles, with partition of Germany, astronomical reparations, and forced labour on a huge scale. These proposals go practically uncriticized, while in much of the left-wing press hack writers are even hired to extol them. The result is that the average man has no notion of the enormity of what is proposed. I don’t know whether, when the time comes, the Russians will really want to put such terms into operation. My guess is that they won’t. But what I do know is that if any such thing were done, the British and probably the American public would never support it when the passion of war had died down. Any ﬂagrantly unjust peace settlement will simply have the result, as it did last time, of making the British people unreasonably sympathetic with the victims. Anglo-Russian friendship depends upon there being a policy which both countries can agree upon, and this is impossible without free discussion and genuine criticism now. There can be no real alliance on the basis of ‘Stalin is always right’. The ﬁrst step towards a real alliance is the dropping of illusions.

Finally, a word to the people who will write me letters about this. May I once again draw attention to the title of this column and remind everyone that the Editors of Tribune are not necessarily in agreement with all that I say, but are putting into practice their belief in freedom of speech?