I have an axe to grind. The recent incredible success of Pokémon Go has left a bitter taste in my mouth, because, essentially, me and a friend came up with the same idea 4 years ago. Never mind that we lacked the small matter of intellectual property rights to one of the world’s biggest and most loved franchises. We had the idea first. And it’s not fair.

What makes Pokémon Go so revolutionary is that it combines the virtual world with the real world, encouraging people to go out and explore their own local environment whilst being part of a parallel online adventure. Dylan Price and I came up with pretty much the exact same concept way back in 2012. We planned to use what was the fresh technology of the day, QR codes, but the principal of concurrent exploration was identical. Below is one of our early storyboards, starring your bitter correspondent. 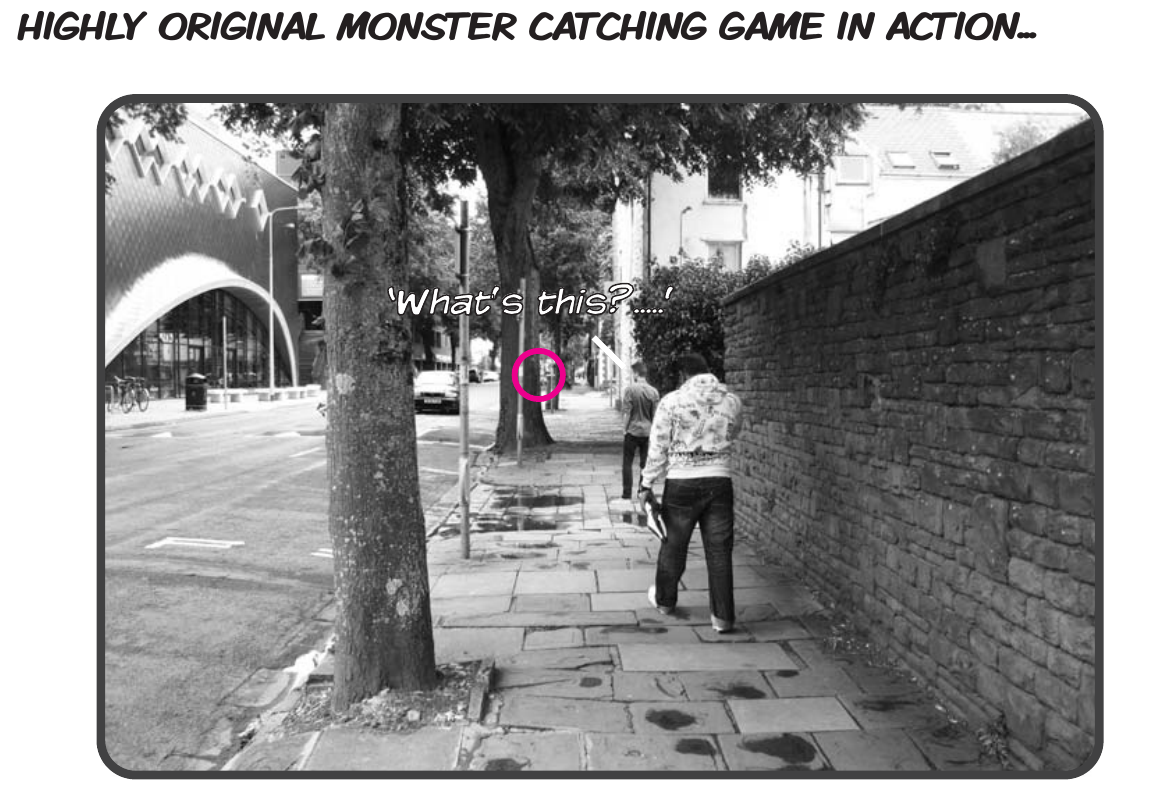 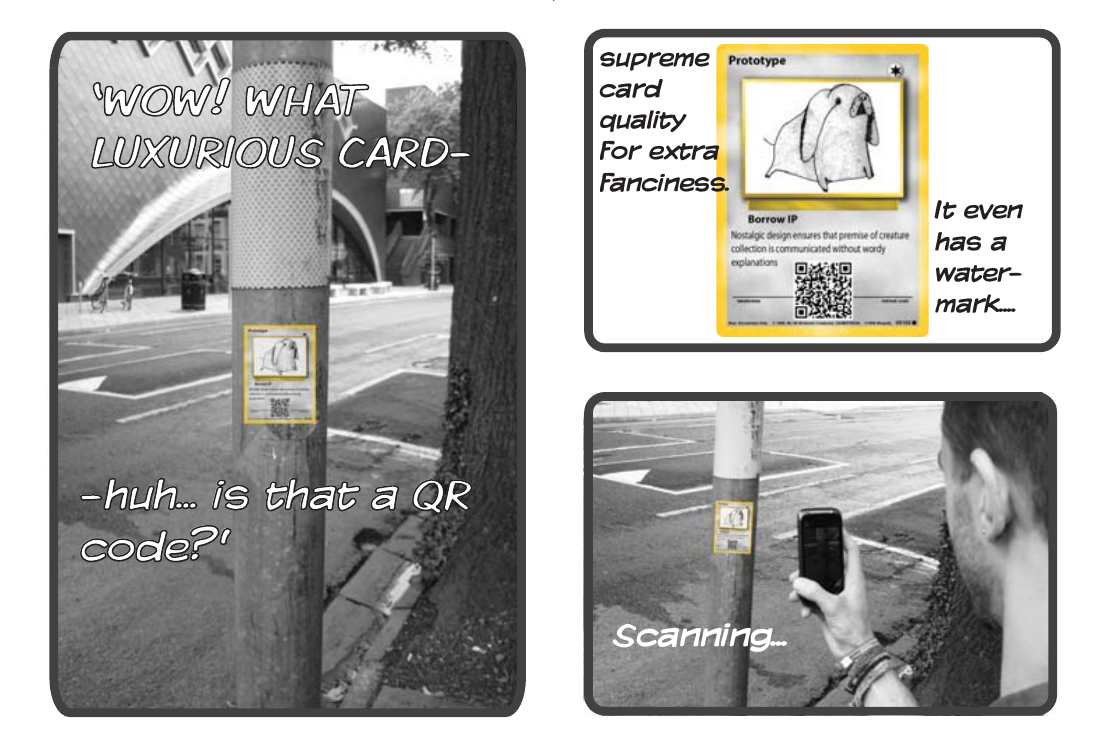 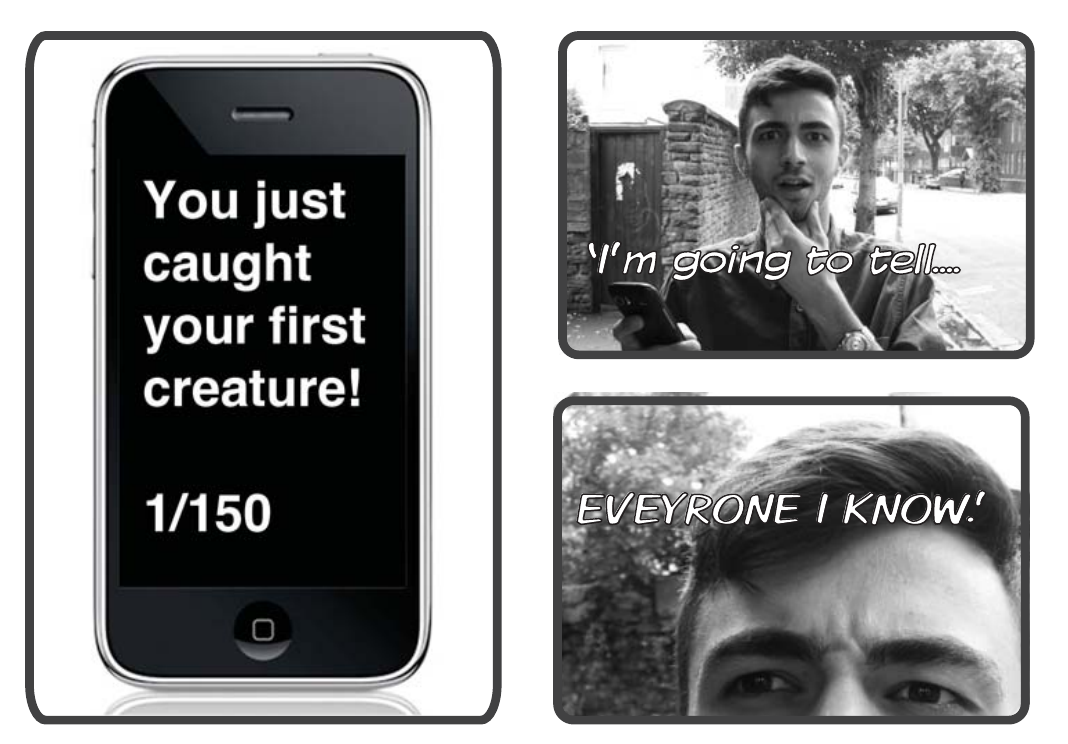 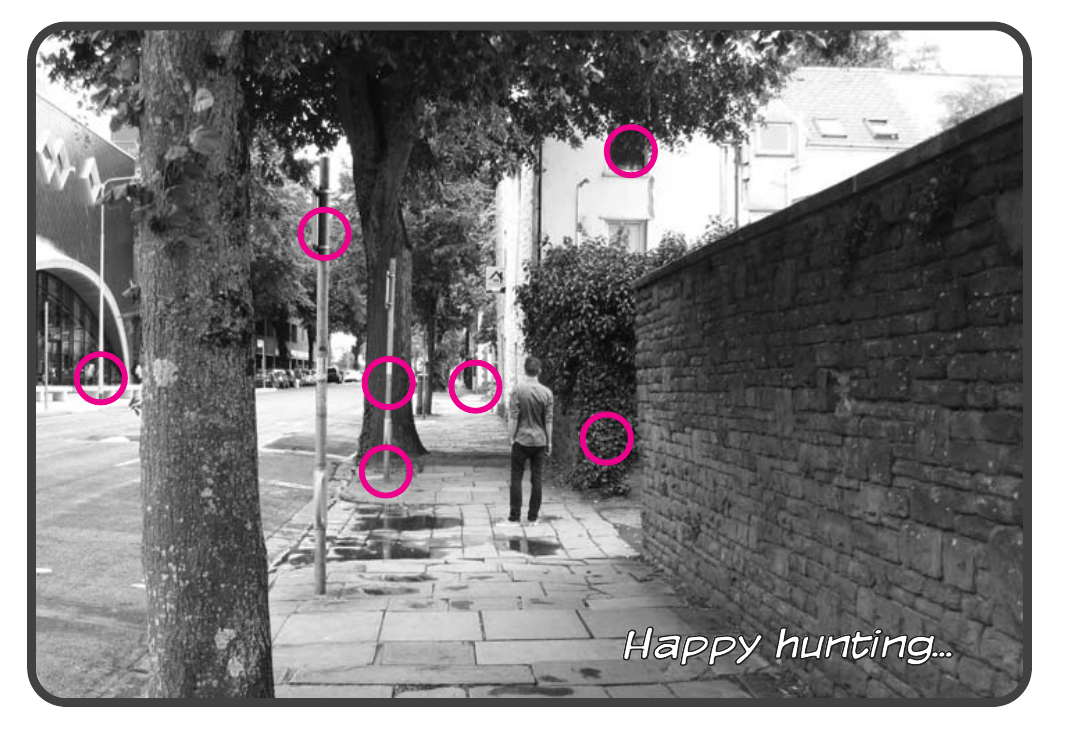 We called it ‘Highly Original Monster Catching Game’ because, well, we wore our inspirations on our sleeves. I started developing the infrastructure in PHP because I was a naive masochist. We even started to design the ‘monsters’ in our game, opting for a scruffy, derpy version of the anime characters from the-franchise-that-shall-not-be-named.

Here’s part of a pitch we made to Spark, an enterprise competition run by Cardiff University (who are now, I imagine, weeping in to a bowl of glamorgan sausages, lamenting their lost billions).

‘Highly Original Monster Catching Game’ is an interactive art installation based around the concept of recognising the importance of play, exploration and imagination in a demographic that extends beyond children and young adolescents. Too often are we absorbed by the pace of the daily grind that we forget to take a step outside of ‘ordinary life’ and enter a non-serious space where we can free our imaginations, explore the environment or simply become absorbed within a new rule set to no particular end. There exist social stigmas around both art and video games which limit the demographic for those who can enjoy either. The traditional format of both mediums requires time to be set apart to enjoy and focus solely on these activities, causing them to lose priority over more ‘important’ tasks … Although art in the urban context does exist, it is enjoyed for a short moment and does not invite participation on the viewers part. Our aim is to create a form of play that invades our every day lives – an antidote to the serious.

We planned to start small, launching in Cardiff, but knew that world domination was inevitable.

Our installation of small interactive illustrations of creatures will infect a designated Ward in Cardiff. A QR code allows these images to be collected in a form of treasure hunt - the end goal being to find the entire collection. Your collection is represented on your profile on the ‘Highly Original Monster Catching Game’ website along with statistics about your previous discoveries. These illustrations are frequent enough to be noticed by the more perceptive or lucky, and small enough to encourage individuals to investigate their environment more on a daily basis.

Augmented reality was a pipe dream at the time, so rather than animating monsters within an app we planned to print images of the monsters with their stats on a card including the QR code.

Our product is a game for all ages, with a simple premise: catching monsters. The ‘monsters’ in our game are pictures, printed on small, A5 posters distributed in different locations around the city. Each poster has a QR-code, as shown to the right, which when scanned with the players mobile phone directs them to a website where they can see which monsters they have collected. The site will also have maps and hints on where to find other monsters.

A facebook plugin was in the pipeline. Our ambition knew no bounds.

This is the initial base set up of the project, but areas for expansion include linking to Facebook, so that users can share which monsters they have caught and direct their friends to find them. A downloadable cross-platform smartphone application would also allow users to check the monsters they have collected and access social platforms such as Facebook.

This was no pie in the sky dream. We had a cost model, albeit this consisted of a couple of vague sentences about ‘server space’.

Initial costs would include setting up the website, advertising, and sending out the first round of posters. Server space, website management, and poster distribution will all contribute towards recurring costs; many of the posters may be removed or suffer wear over time, therefore they will have to be replaced regularly.

Alas, it was not to be. We didn’t make it very far in the Spark competition, and the project was quietly shelved whilst we returned to the more mundane tasks of finishing our undergraduate degrees. Now our dream lives, and it’s everything we envisioned it could be and more. All I ask is that you think of me and Dylan next time you spend £75 on Pokécoins, and the original, groundbreaking, Highly Original Monster Catching Game.