Despite reading article after article on, and getting very excited about, virtual reality, I had yet to actually get my hands on a headset, my main excuse being that I’m not mad rich enough to get an oculus rift, and neither are any of my friends. Fortunately, Google solved this issue last year with Project Cardboard. Version 2 has recently been released, so I decided to take the relatively small plunge; I opted for a third party kit from Amazon (image below) rather than building my own, which is a little more expensive but definitely the quickest and easiest way to get started. After just 5 minutes playing with a couple of demo apps, I was blown away.

It’s basically a hack, using your existing phone’s computer screen and tracking sensor, with a couple of lenses housed in a cardboard box draped over the top of it. The results, though, are still responsive enough to feel truly immersive. 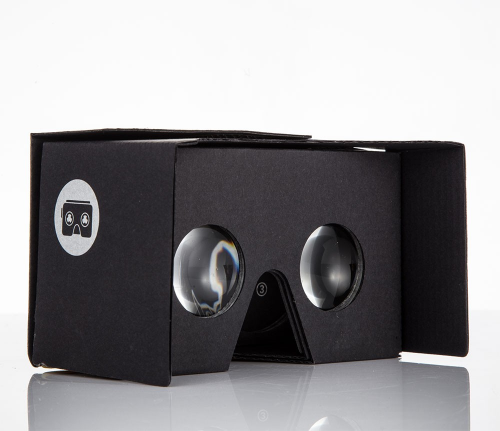 It’s compatible with both Android and iOS devices (does anyone have a Windows phone anymore?), and the financial barrier to entry is so low that I encourage anyone with a passing interest in this tech to get involved. You can buy the lenses independently online and carve your own box from Google supplied instructions if you want to cut costs even further.

From my limited playing so far, here are some of the apps I can recommend on the Android platform.

An obvious one (it actually comes with the default cardboard app), but pretty mindblowing in this format. It’s a little unstable on my phone (HTC One M8), but the controls are slick; just click once to start moving, again to stop, and if you look to the sky and click then you shoot through the clouds for a satellite’s perspective of Earth. From here you can marvel at the continent’s below, before clicking once again at the destination of your choice, which sends you shooting down superman style toward the surface.

A collection of short films shot in 360. Most are narrated, leaving you free to search the rest of the view whilst not losing track of the story. The simple act of turning around and exploring your surroundings whilst still consuming the narrative feels natural and far more engaging than your usual 2-dimensional film (and importantly doesn’t feel gimmicky).

Short film from a collaboration between the women’s fashion magazine Elle and VR software house Jaunt, marketed as the “first ever virtual reality fashion film”. It’s a short but trippy technicolour adventure that got me thinking about the huge variety of experiences that are going to be available for this platform, not just in gaming.

The only interactive app I’ve downloaded so far, and whilst it’s very short with relatively basic graphics, it’s a great demonstration of the possibilities for immersive gameplay, especially in science fiction.

There are plenty more applications out there worth exploring, and lots of 3D videos on YouTube, VRSE and other platforms. It’s worth bearing in mind, though, that during use you may look a little strange to any friends or family outside in the real world. You may, depending on how mean those friends and family are, be particularly vulnerable to a social media mocking.