Below are some brief summaries of research areas I am currently working in, or have recently worked on. If you’re interested in any of these topics and would like to chat further, please get in touch!

Sub-millimetre galaxies, or SMGs, are an enigmatic population of galaxies in the early universe that are incredibly bright in submillimetre wavelengths ($\sim 100 \mathrm{\mu m} - 1 \mathrm{mm}$), forming huge numbers of stars. It has been very difficult to model these objects in cosmological simulations whilst still self-consistently matching other observational constraints, such as the galaxy stellar mass function, at $z = 0$, and many authors have proposed alternative modelling approaches, such as a varibale IMF, to explain them. For a concise summary of the issues faced modelling these objects, see this thread from Desika! 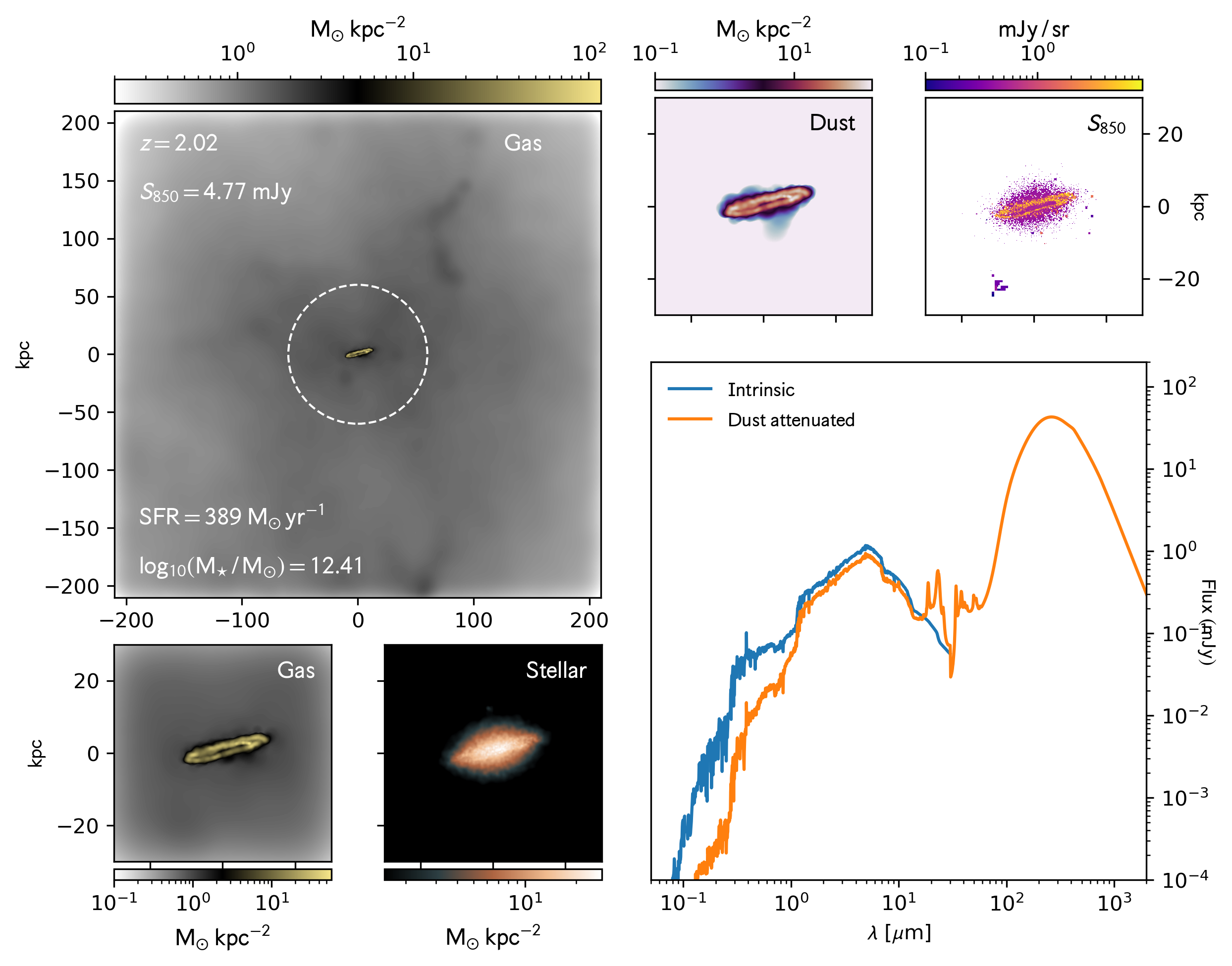 An example SMG showing the gas, stellar and dust distribution, as well as the resolved and integrated $S_{850}$ emission.

Recently (Lovell et al. 2021a; arXiv:2006.15156), we used the SIMBA simulation combined with the radiative transfer package Powderday to model the sub-mm emission, and found unprecedented agreement with observationally inferred integrated number counts from single-dish instruments. We assessed the impact of unassociated blending by building a lightcone, and found a slight boost in the normalisation of at the bright end. The good agreement is driven primarily by the good match to IR-constraints on the high-redshift star formation rate function in SIMBA, as well as the self-consistent dust model which leads to higher dust masses compared to using a fixed dust-to-metals ratio, by up to a factor of 2.5.

In a subsequent work (Lovell et al. 2021b; arXiv:2106.11588), we studied how the emission of SMGs is dependent on their morphology and orientation, and found an ‘orientation bias’ in observations of SMGs. This has knock-on effects on inferred properties, such as dust temperatures and IR luminosities, as well as SFRs and other derived properties. It also manifests as a selection effect, that is both wavelength and redshift dependent, and we provide a toolfor modelling this for arbitrary surveys. 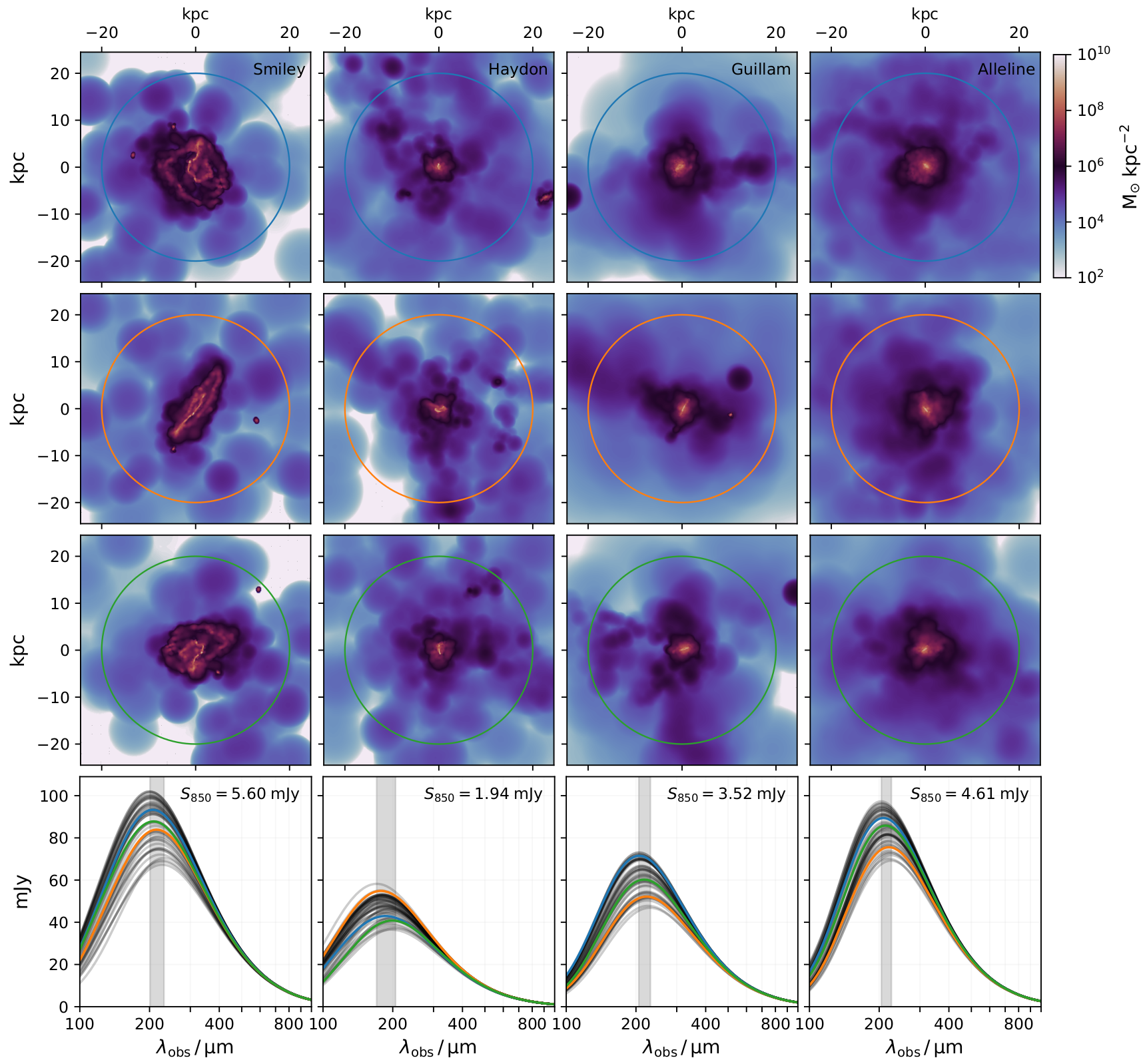 Cosmological hydrodynamic simulations have, in recent years, become capable of matching key distribution functions in the local universe, such as those of stellar mass and star formation rate. However, high resolution, large volume simulations have rarely been tested in the high redshift ($z > 5$) regime, particularly in the most overdense environments. Creating models that fit both high redshift and low redshift observables self consistently is a significant challenge, but key to understanding the properties of galaxies in the first billion years of the universe’s history, and how this affects their latter evolution. Such models are also necessary to make detailed predictions, and plan observations, for upcoming space based instruments, such as JWST, WFIRST and Euclid. 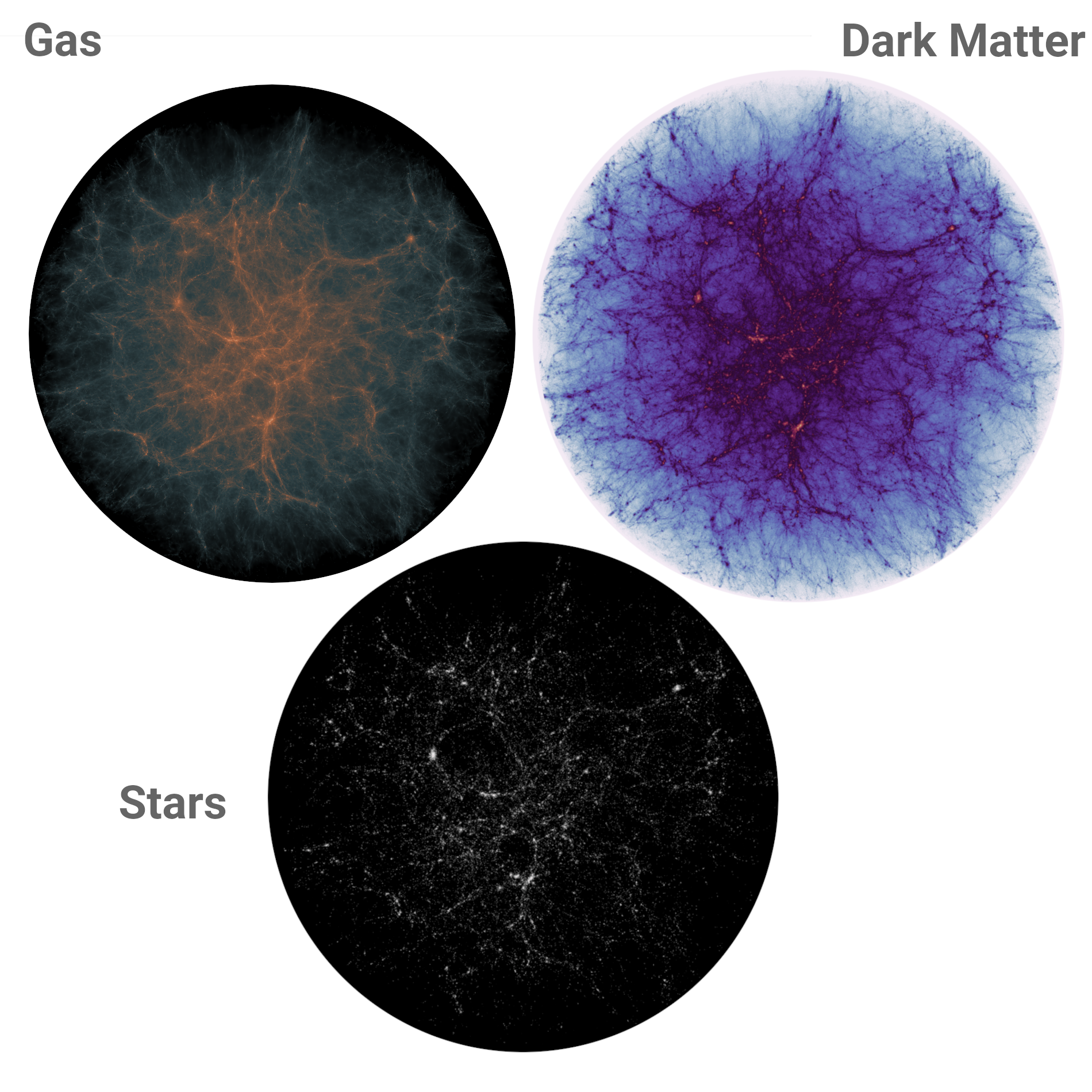 The column density of gas, stars and dark matter in the most overdense region in the FLARES sample.

To approach these problems we started the First Light And Reionisation Epoch Simulations (FLARES), a suite of 40 ‘zoom’ simulations using a modified version of the EAGLE code. EAGLE is a state-of-the-art cosmological hydrodynamic simulation that has been tuned to a small number of distribution functions in the local universe. We selected regions at high redshift ($z = 4.67$), with a range of overdensities, from an enormous $(3.2 \, \mathrm{Gpc})^3$ periodic dark matter-only volume, and resimulated these with full hydrodynamics at fiducial EAGLE resolution ($m_{\mathrm{gas}} \sim 10^6 \, \mathrm{M_{\odot} \, yr^{-1}}$). I led the first release paper (Lovell et al 2021; arXiv:2004.07283) in which we study the galaxy stellar mass function, star formation rate function and star-forming sequence predictions. By weighting them appropriately we combine the regions to produce composite distribution functions, significantly extending the dynamic range compared to periodic simulations at similar resolution. We can also study the environmental dependence of galaxy formation and evolution during the Epoch of Reionisation (EoR). Below is an introductory talk that I gave at the 2020 SAZERAC meeting (with awkward slide transition requests due to a technical error…!).

There are a number of other FLARES papers either published or in the works. Aswin presented predictions for the photometric properties in Vijayan et al 2020; arXiv:2008.06057, and will soon be presenting predictions for the dust reprocessed emission, using radiative transfer techniques. I am currently working on predictions for the passive galaxy population at $z > 5$, some early results are presented in this talk at SAZERAC 2021 here. For further details please check out our dedicated website, flaresimulations.github.io, where you can find data products and visualisations.

I am keenly interested in the interface between simulations and machine learning (ML) methods, and have written a number of papers on a variety of related topics.

Recently, I submitted a paper (Lovell et al. 2021c) that attempts to predict the baryonic properties of dark matter halos directly from their dark matter properties using matched hydrodynamic and dark matter only (DMO) simulations. Whilst this method has been demonstrated in previous works, the unique thing about our approach was that we used both periodic and zoom simulations of cluster environments, which allowed us to sample both mean and overdense regions. This then allowed us to apply the trained model to a much larger DMO simulation, the $800 \mathrm{Mpc^3}$ P-Millennium simulation, and predict distribution functions and clustering statistics in this much larger volume for a fraction of the cost of a full-hydro simulation. 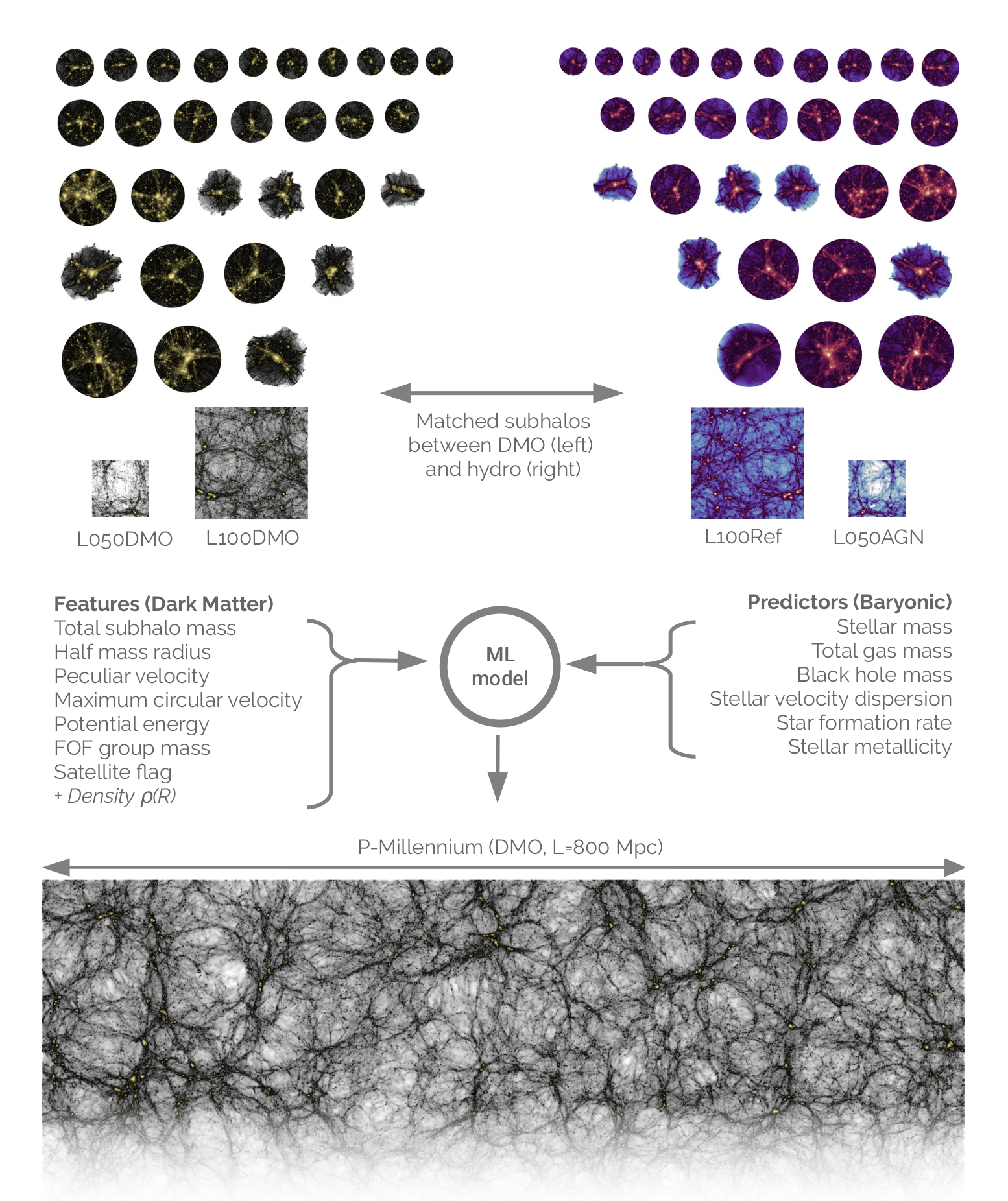 The simulations, features and predictors in the EAGLE and C-EAGLE simulations, as well as the dark matter only P-Millennium simulation to which we applied our model.

In Lovell et al. 2019 I worked with Prof. Viviana Acquaviva at City University New York to develop a new tool for predicting Star Formation Histories (SFH). We trained a Convolutional Neural Network to learn the relationship between spectra and SFH in the EAGLE and Illustris simulations, and the applied this to the SDSS catalogue. Below is a talk I gave on this research at the Royal Astronomical Society meeting, “Machine Learning and Artificial Intelligence applied to astronomy” in March 2019 (slides available here). We followed this up with a paper (Acquaviva, Lovell & Ishida, 2020) accepted for the 2020 NeurIPS workshop “Machine Learning and the Physical Sciences”, in which we attempt to model the ‘generalization error’, and provide a means of estimating how models trained on simulation data might perform on real-world data.

Galaxy clusters are the largest collapsed objects in the universe, comprising of a highly evolved galaxy population embedded in a hot, rarefied InterCluster Medium (ICM). Their pre-collapse progenitors, known as galaxy protoclusters, are host to some of the most extreme objects (in terms of mass, star formation rate and nuclear activity) at these early times. Protoclusters are of significant interest for understanding the environmental dependence of galaxy evolution at early times, as well as the build-up, enrichment and heating of the ICM.

Protoclusters do not yet host an X-ray emitting ICM, and so are primarily identified through 3D galaxy overdensities. In Lovell et al. 2018 I studied in detail the relationship between galaxy overdensity and the presence and descendant mass of protoclusters in the L-galaxies semi-analytic model.