This review is also available on Goodreads.

Before ‘The Terminal Beach’ I hadn’t read any Ballard before, but I’m aware of his other work (Empire of the Sun, the Crystal World, the recently cinematised High-Rise) and the reputation he’s built on them. I’ve spoken before on this blog about the trepidation one can feel approaching a renowned authors work, and with Ballard it was no different. But short stories are an ideal way of sampling an authors work before undertaking their novels, and The Terminal Beach has certainly inspired me to explore his other output.

This collection was published in 1964, and so contains some of his earliest short form fiction. Most of it was written at the height of the cold war, and the themes and locations reflect the times; abandoned nuclear testing grounds, spacecraft crash sites, the effects of contamination by alien substances, all set a vivid scene for the, at times psychological, drama to come. 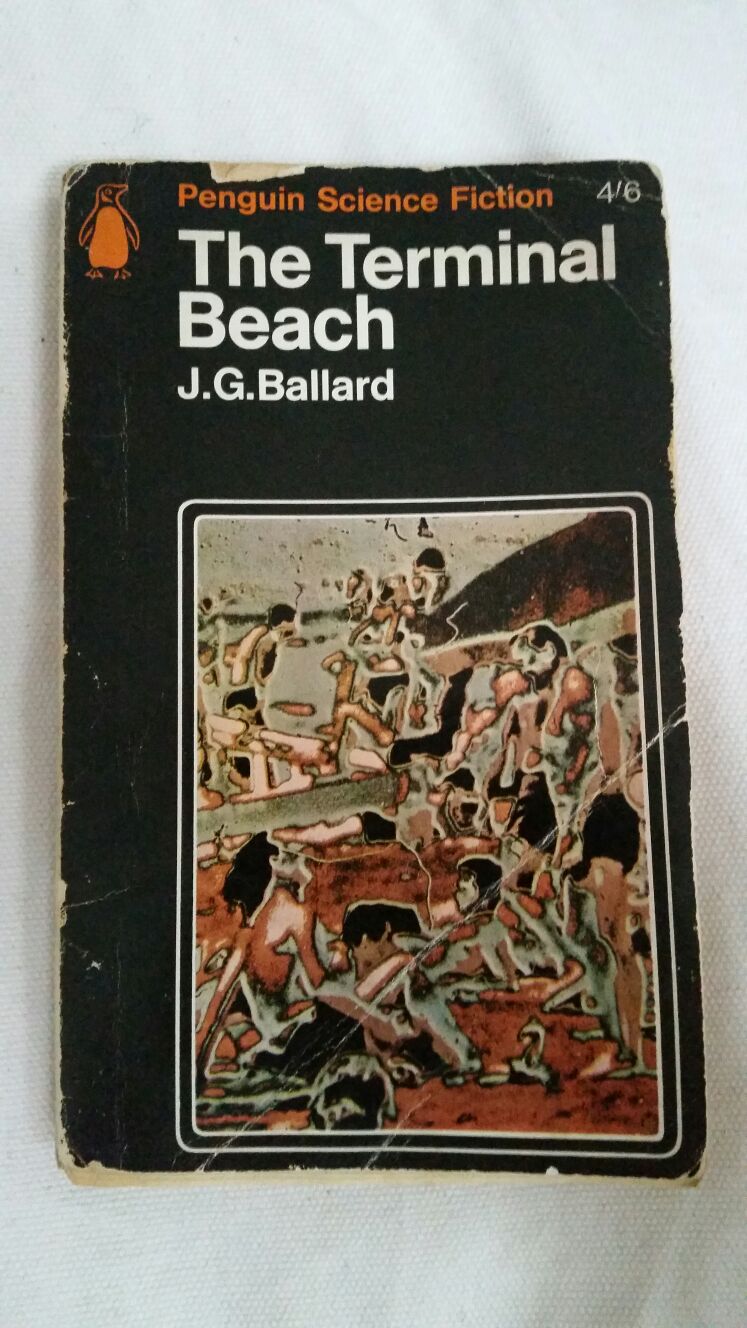 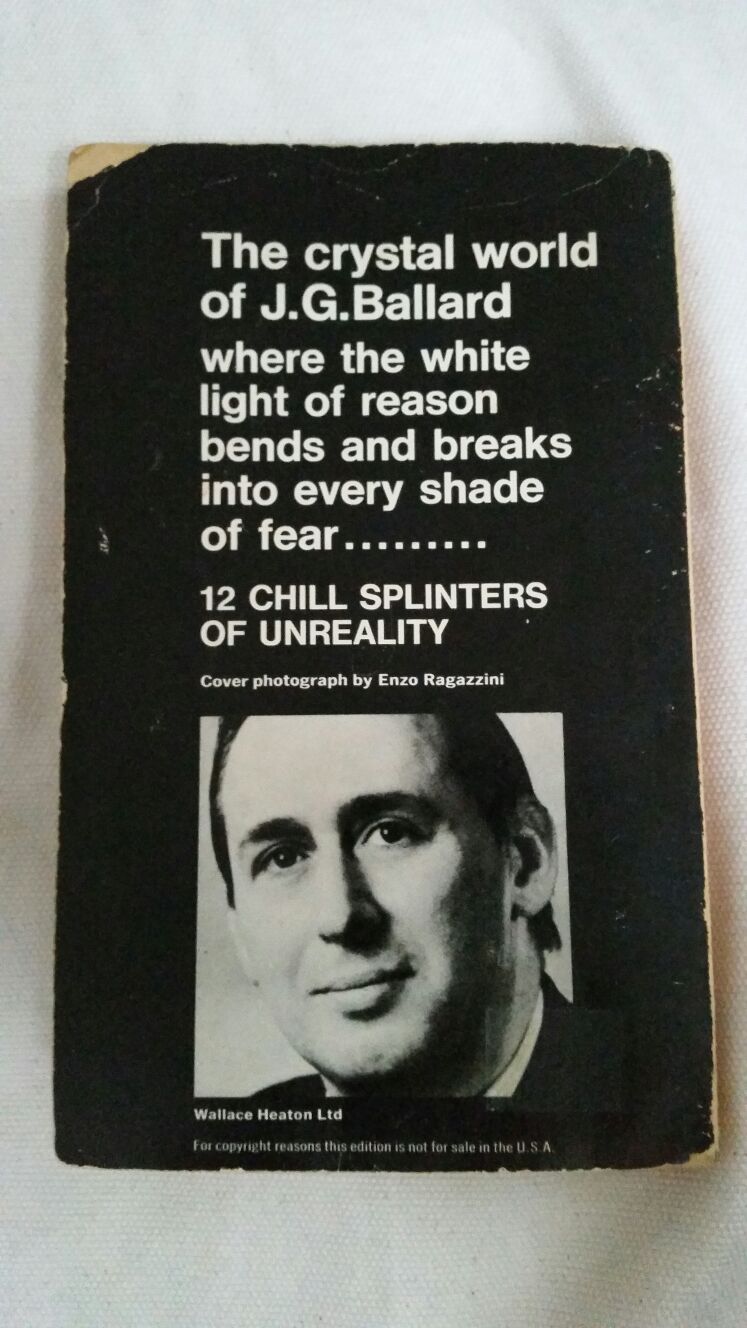 The title story, “The Terminal Beach” (1964), appears half way through the collection, and explores the uniquely artifical landscape of Eniwetok (a collection of islands in the pacific, now officially spelt ‘Enewetak’) through the eyes of Traven, willingly marooned on the atoll after the death of his wife and daughter in a car crash. The site for 43 Atomic weapons tests in the 1950’s, Eniwetok is scattered with reminders of what Traven calls the ‘Pre-Third’ age, the years before the seemingly inevitable third world war, characterised “above all by its moral and psychological inversions, by its sense of the whole of history, and in particular of the immediate future… suspended from the quiversing volcano’s lip of World War III”. The creepiest inhabitants of the island are the plastic test dummies, their shadows burned in to the concrete pens and bunkers dotted around the rim of the atoll by the initial flash of the tests.

The human mind is a common subject across all of these stories, and in “The Terminal Beach” it is the main scene for the narrative. We see Traven’s mental deterioration first hand: he begins to hallucinate, seeing mirages of his dead family, as a result of dehydration, hunger and isolation, but also, Ballard seems to suggest, as a direct consequence of the bleak, foreboding landscape he has immersed himself in.

“Billennium” (1961) is one of my favourite stories form the collection. The premise is simple - unabated population growth has swelled the world’s cities to the point where they are almost uninhabitable, creating a Malthusian nightmare. Persons are restricted to four square meters of floor space each, so when the heroes of the story discover a large uninhabited room they are almost overcome with the space it affords: “For an hour they exchanged places, wandering silently around the dusty room, stretching their arms out to feel its unconfined emptiness, grasping at the sensation of absolute spatial freedom”. Paradoxically, families with children are granted extra floor space, incentivising the population growth that is drowning the world - a stark warning against future socio-economic mismanagement.

“Deep End” (1961) also portrays a dystopic vision of humanities future on Earth, depicting a world dehydrated through the mining of oxygen from the oceans. When a young romantic, who has chosen to remain on Earth despite all his fellow adolescents migrating to the space colonies and other planets, discovers one of the last remaining fish in a small pool, he dreams of preserving it, a relic of the Earth that once was.

“A Question of Re-entry” (1962) is symbolic of Heart of Darkness, following a scientist as he travels up an Amazonian tributary to a local tribe, searching for any evidence of a stricken space probe. The tribe is controlled by a shady westerner, who has a mysterious control over the tribes affairs. A fascinating collision of the traditional and the space age; the title refers to both the fall of the space probe, as well as the questions around assimilation of traditional tribes and peoples in to twentieth century civilisation.

“The Illuminated Man” (1964) was apparently the basis for Ballard’s later novel ‘The Crystal World’. It follows a journalist granted access to a mysterious crystalline growth off the Florida peninsula, and the futile resistance of the plants, animals and people against it. One particularly chilling scene depicts a priest marooned in his church, who sacrifices himself to the growth. The style of the story, and the effect of the interminable growth on the characters, reminded me a little of the style and characters in the game ‘Bioshock’, where the societal and physical decline of Rapture turns the inhabitants slowly insane.

“The Reptile Enclosure” (1962) is set on a crowded beach on a sunny day, but builds in dread to a terrifying climax. It’s one of my favourites from the collection for its mix of the modern and the Lovecraftian. “The Delta at Sunset” (1964) also follows this formula, with a psychological decline of its main character similar to ‘The Terminal Beach’, and a mix of the prehistoric with the contemporary portrayed through chilling visions of snakes writhing in the sunset.

“The Drowned Giant” (1964) is one of the shorter, more romantic of the novels. A giant, dead, washes up on the coast of England, and people travel from far and wide to see it. As it begins to decay, interest wanes, and pieces of the remains are removed and taken away indiscriminately and exhibited across the continent, often without attribution to the original fantastical source. A commentary on our tendency to dismantle the extraordinary and make it ordinary?

Some of the stories are not strictly science fiction at all. “End-Game” (1962) follows the trials and deliberations of a Soviet official awaiting the execution of his sentence whilst imprisoned in a remote chalet. Unfortunately for him, the sentence is death at the hands of his sole companion at the chalet, a strong but quite man who both guards him and provides his final company. “The Volcano Dances” (1964) is a bizarre, stunted story of a man and a woman living on the side of the active Mexican volcano Iztaccihuatl, accompanied by a mad, dancing shaman who they appease with regular donations of a single dollar. “The Gioconda of the Twilight Noon” (1964) exhibits the lovecraftian themes of ‘The Delta at Sunset’, such as the disintegration of the mind under stress. The collection ends with the “The Lost Leonardo” (1964), a biblically inspired detective story, set in the gossiping art world of Western europe.

Ballard’s prose can get a bit overblown and flowery at times. My vocabulary was certainly given a good work out; I now know ten different ways of describing the way light eminates from crystals thanks to ‘The Illuminated Man’.

In all, this is a brilliant short story collection, and if it is indicative of the quality of his novels, a great introduction to Ballard.